Paxlovid dramatically reduced the risk of severe illness and death, but it must be started soon after developing symptoms.

Update: On November 16, Pfizer requested emergency use authorization from the Food and Drug Administration for the treatment of mild to moderate COVID-19 in people at increased risk of hospitalization or death.

Note: This report was originally published on November 5, 2021.

Paxlovid, an experimental oral antiviral, reduced the risk of hospitalization or death by 89% compared with a placebo among adults at high risk for severe COVID-19 who were treated within three days of symptom onset, according to an announcement from Pfizer. The study was halted early and the company plans to request Food and Drug Administration (FDA) emergency use authorization as soon as possible.

FANTASTIC news for your Friday! Phase 2/3 results of PAXLOVID, Pfizer’s COVID-19 oral antiviral shows the risk of hospitalization or death is REDUCED by NEARLY 90% in high-risk adults with COVID-19 when taken within three days of experiencing symptoms.

Despite the availability of highly effective COVID-19 vaccines, there is currently no oral treatment for early disease. Monoclonal antibodies are used to prevent disease progression, but they require injection or IV infusion. Other medications, including remdesivir (Veklury) and dexamethasone, are used to treat hospitalized patients with more severe disease.

Paxlovid, formerly known as PF-07321332, is a SARS-CoV-2 protease inhibitor that interferes with an enzyme needed for viral replication. (Paxlovid appears to be the brand name; Pfizer’s announcement did not mention a generic name.) It grew out of research on the related 2003 SARS virus, and it has demonstrated activity against other coronaviruses in laboratory studies. Like some HIV protease inhibitors, it is administered with a low-dose ritonavir booster to maintain drug levels in the body. Treatment should be started within five days after symptom onset, and a course of therapy lasts five days.

The Phase II/III EPIC-HR trial enrolled non-hospitalized adults with COVID-19 in North and South America, Europe, Africa and Asia who were at high risk of progressing to severe illness. They had mild to moderate symptoms starting no more than five days prior to enrollment, a positive SARS-CoV-2 test and at least one underlying condition associated with severe illness. They were randomly assigned to receive Paxlovid or a placebo twice daily for five days.

On November 5, Pfizer announced that a planned interim analysis of 1,219 participants showed an 89% reduction in the risk of COVID-19-related hospitalization or death from any cause in people who started treatment within three days of symptom onset. Three of the 389 patients treated with Paxlovid (0.8%) were hospitalized over 28 days, compared with 27 of the 385 (7.0%) people who received the placebo. No Paxlovid recipients and seven placebo recipients died.

Based on these findings, which have not yet been peer-reviewed or published, an independent data and safety monitoring board, in consultation with the FDA, recommended that the trial be stopped ahead of schedule. This typically happens when early results show that a therapy is either ineffective or so effective that it would be unethical to continue giving some participants a placebo.

Treatment was generally safe and well tolerated, according to Pfizer’s press release. Rates of treatment-emergent adverse events—mostly mild—were comparable in the Paxlovid and placebo arms (19% and 21%, respectively). Side effects and drug resistance are less likely to be a concern for a medication taken for only five days, unlike drugs used for lifelong HIV treatment. In preclinical studies, it did not show evidence of mutagenesis.

Ritonavir can interact with many other medications, and doctors and pharmacists should be aware of the risk. It’s unclear what this means for people taking HIV protease inhibitor combination pills that contain ritonavir. If Paxlovid is not coformulated with ritonavir in the same pill, HIV-positive people who are already taking a ritonavir-containing antiretroviral regimen might be able to skip it.

If approved, it could help to lessen the impact of COVID-19 on patients & society: https://t.co/Ek33qj56HV pic.twitter.com/NKTzaOZBeJ

“Today’s news is a real game-changer in the global efforts to halt the devastation of this pandemic,” said Pfizer chairman and CEO Albert Bourla. “These data suggest that our oral antiviral candidate, if approved or authorized by regulatory authorities, has the potential to save patients’ lives, reduce the severity of COVID-19 infections, and eliminate up to nine out of ten hospitalizations.”

Pfizer said it expects to produce more than 180,000 pill packs by the end of 2021 and aims to scale-up production in 2022. The company did not announce a price.

“Given the continued global impact of COVID-19, we have remained laser-focused on the science and fulfilling our responsibility to help healthcare systems and institutions around the world while ensuring equitable and broad access to people everywhere,” Bourla added. Pfizer said it would offer Paxlovid through a “tiered pricing approach” based on the income level of each country.

Pfizer, along with its collaborator BioNTech, also makes the most widely used U.S. COVID-19 vaccine, and scientists and advocates have accused the company of not doing enough to provide global access.

Another oral antiviral that works by a different mechanism, molnupiravir, reduced the risk of hospitalization or death by 50% among people with mild to moderate COVID-19, Merck and Ridgeback Biotherapeutics announced last month. It too must be started within five days of symptoms onset and is taken for five days. Molnupiravir was authorized in the United Kingdom this week, and an FDA advisory committee will meet on November 30 to discuss U.S. authorization.

On the other hand, Atea Pharmaceuticals and Roche recently announced that its oral antiviral AT-527, a SARS-CoV-2 polymerase inhibitor, did not significantly reduce viral load compared with a placebo in mostly low-risk participants in the MOONSONG trial, though it did so in a subset of high-risk patients with underlying conditions.

Even before Pfizer announced the latest results, rumors were already circulating that Paxlovid is the same as ivermectin, an antiparasitic drug touted—without good evidence—as a treatment for COVID-19. It’s true that ivermectin is also a protease inhibitor, but all drugs in this class do not work the same. The HIV therapy Kaletra (lopinavir/ritonavir), for example, was found to be ineffective against COVID-19.

The Associated Press fact-checked the claim and found it was unsupported. “Pfizer’s drug has protease inhibitor activity like ivermectin, but they are a very different kettle of fish on a variety of levels,” said Cheryl Walter, a virologist at the University of Hull in England.

The expected authorization of Paxlovid and molnupiravir raise questions about appropriate use of the oral antivirals. For example, should they be available for everyone with early COVID-19 or only those at high risk for severe disease? Are they appropriate for vaccinated individuals with breakthrough infection? The Phase II/III EPIC-SR trial, studying Paxlovid for people at standard risk, is now underway; that study includes a cohort of vaccinated patients. In practical terms, will people be able to get tested for SARS-CoV-2 soon enough to fall within the five-day window after developing symptoms?

Another issue is whether oral antivirals could be used as post-exposure prophylaxis after someone has been in close contact with a person known to have SARS-CoV-2. Paxlovid is being studied for this indication in the EPIC-PEP trial.

Health officials emphasize that antivirals are not a substitute for vaccination. But the drugs could potentially be used as COVID-19 pre-exposure prophylaxis for high-risk immunocompromised people who don’t respond well to the vaccines. 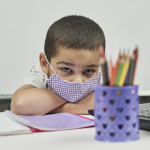