The antiviral drug is the first treatment for the new coronavirus to be approved in the United States.

On October 22, the Food and Drug Administration (FDA) gave the green light to Gilead Sciences’ remdesivir (Veklury), making it the first treatment to be approved in the United States for COVID-19, the disease caused by the new SARS-CoV-2 coronavirus.

Remdesivir was approved for adults and children ages 12 and older and weighing at least 88 pounds who require hospitalization. The drug, which is administered by IV infusion, should be given only in a hospital or in a health care setting capable of providing acute care, according to the FDA.

“The FDA is committed to expediting the development and availability of COVID-19 treatments during this unprecedented public health emergency,” FDA commissioner Stephen Hahn, MD, said in a press release. “Today’s approval is supported by data from multiple clinical trials that the agency has rigorously assessed and represents an important scientific milestone in the COVID-19 pandemic.”

The FDA granted emergency use authorization (EUA) for remdesivir for people hospitalized with severe COVID-19 in May; in August, the agency expanded the EUA to include all hospitalized patients regardless of disease severity. A modified EUA remains in place for younger children.

Remdesivir is a nucleotide analogue in the same class as several widely used medications for HIV and hepatitis B and C. In fact, it was originally developed as a treatment for hepatitis C and Ebola virus. These drugs interfere with the viral polymerase enzyme, acting as defective building blocks that prevent viruses from making new copies of themselves.

As previously reported, clinical trials of remdesivir have yielded mixed results for people with moderate or severe COVID-19.

The Adaptive COVID-19 Treatment Trial (ACTT-1), sponsored by the National Institutes of Health, showed that hospitalized patients randomly assigned to receive remdesivir recovered five days faster than those who received a placebo (10 days versus 15 days, respectively). Remdesivir also reduced the likelihood of needing mechanical ventilation or external blood oxygenation (13% versus 23%, respectively). There was a trend toward reduced mortality (11% versus 15% at 29 days), but the difference did not reach the threshold for statistical significance.

Most recently, the World Health Organization’s large Solidarity trial showed that remdesivir did not reduce the risk of death, the chances of being put on a ventilator or the length of hospitalization compared with standard care. These results were reported this month in a preprint, meaning they have not yet been peer reviewed.

Remdesivir was generally safe and well tolerated in clinical trials. The most common side effects are nausea and elevated ALT and AST liver enzyme levels. It can also cause allergic reactions, leading to a range of symptoms, including changes in blood pressure and heart rate, shortness of breath, wheezing, swelling and skin rash.

Some experts think remdesivir holds more promise for people treated earlier in the course of illness. Early symptoms of COVID-19 are largely attributable to the SARS-CoV-2 virus itself and may be alleviated by antiviral drugs. In contrast, severe complications in people with advanced disease are more often due to an excessive immune response and are better treated with immune-suppressing medications. So far, only the steroid dexamethasone has been shown to improve survival in people with COVID-19.

Researchers are now testing remdesivir in combination with various other therapies, including the anti-inflammatory JAK1/JAK2 inhibitor barcitinib (Olumiant), the immunomodulator interferon beta-1a and hyperimmune intravenous immunoglobulin, a preparation that contains a high concentration of SARS-CoV-2 neutralizing antibodies. Gilead and others are also working on new formulations of remdesivir that could be administered by subcutaneous injection or inhalation, which would be more practical than IV infusion for people treated outside a hospital.

“The approval of Veklury marks an important milestone in efforts to help address the pandemic by offering an effective treatment that helps patients recover faster and, in turn, helps preserve scarce health care resources,” Barry Zingman, MD, of the Albert Einstein College of Medicine and Montefiore Medical Center in New York City said in a Gilead press release. “The availability of a rigorously tested treatment that can significantly speed recovery and offers other benefits such as lower rates of progression to mechanical ventilation, provides hospitalized patients and their families important hope and offers health care providers a critical tool as they care for patients in need.” 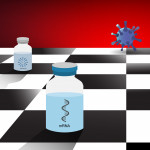