A vaccine using mRNA technology induced an immune response in mice and ferrets against 20 different types of influenza.

December 12, 2022 • By Sharon Reynolds and National Institutes of Health

Influenza, the virus that causes the flu, can be deadly. Twenty different types of the virus have been identified. Many of these circulate between animals and people. This, along with the seasonal virus’s frequent mutations, makes developing effective flu vaccines with broad protection difficult.

Seasonal flu vaccines are reformulated each year to tailor them to the virus types predicted to be most common in the upcoming flu season. If these predictions are off, the season’s flu vaccine may not provide optimal protection.

Researchers have long been working toward a universal vaccine that could protect against all known influenza types and prevent future flu pandemics. Most of these efforts have focused on trying to induce the immune system to recognize areas of the virus that are similar between types.

An NIH-funded research team led by Dr. Scott Hensley from the University of Pennsylvania tested a different strategy. They designed a vaccine that included a virus protein from all 20 distinct influenza types. Such a strategy hadn’t been possible with traditional vaccine production methods. But the researchers thought it might be with mRNA technology. This technology had been used for some of the vaccines against SARS-CoV-2, the virus that causes COVID-19.

In their new study, the team made a vaccine using mRNAs for a key virus protein called hemagglutinin (HA) from all 20 influenza types. The mRNA was packaged in protective fatty nanoparticles. The researchers then tested the vaccine in mice and ferrets. Results were published on November 25, 2022, in Science.

Vaccinated mice produced antibodies against both similar and unique regions of all 20 different HAs, and levels of these antibodies remained unchanged for months after vaccination. This robust antibody production occurred whether or not the mice had previously been exposed to one of the flu strains.

Finally, the researchers tested a two-dose vaccination strategy, similar to that used for COVID-19, in ferrets. A month after the second dose, they challenged the ferrets with an avian flu strain that was distinct from the ones used in the vaccine. Vaccinated animals got sick, but recovered quickly and all survived. In contrast, half of the unvaccinated animals died, and those that survived took longer to clear the virus from their bodies.

“For a conventional vaccine, immunizing against all these types would be a major challenge, but with mRNA technology it’s relatively easy,” Hensley says. “The idea here is to have a vaccine that will give people a baseline level of immune memory to diverse flu strains, so that there will be far less disease and death when the next flu pandemic occurs.”

This vaccine hasn’t yet been tested in people. But with further development, such universal mRNA vaccines have the potential to protect against both seasonal influenza viruses and those with the potential to cause pandemics.

This research summary was originally published by the National Institutes of Health on December 6, 2022. 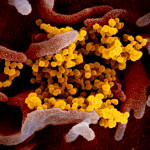