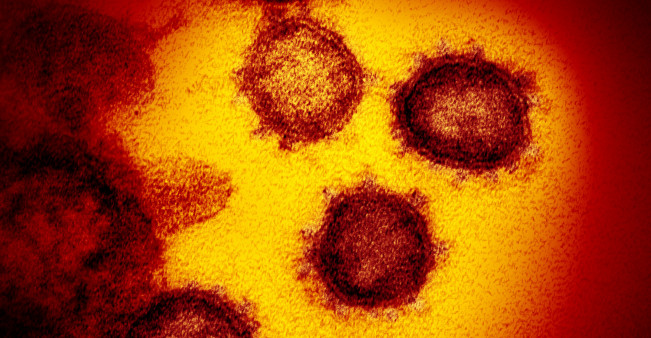 Antiviral drugs that target host cells may work against many existing and future variants of the virus that causes COVID-19.

April 26, 2022 • By Sharon Reynolds and National Institutes of Health

SARS-CoV-2, the virus that causes COVID-19, has continuously mutated since it emerged in late 2019. This rapid evolution poses challenges for vaccines and treatments designed to target the virus. A booster shot is now needed to produce antibodies to fight off the Omicron variant of SARS-CoV-2. And several combinations of antibody treatments approved earlier in the pandemic don’t work well against Omicron.

An alternate approach to treating COVID-19 is blocking proteins on human cells that the virus uses to infect them. These proteins change very little, if at all, over time.

A team led by Dr. Hector Aguilar-Carreño from Cornell University and collaborators in Canada have been developing compounds that can block one such protein, called TMPRSS2. The virus needs this protein to help its spike protein fuse with the cell membrane and get inside the cell.

The work was funded in part by NIH’s National Institute of Allergy and Infectious Diseases (NIAID). Results were published on March 28, 2022, in Nature.

In experiments in cells, several of the new compounds inhibited the activity of TMPRSS2, some by more than 80%. Four of the most promising compounds worked well at very low concentrations and had no negative impact on normal cell survival.

The researchers next screened these top candidates for their ability to prevent SARS-CoV-2 from infecting cells. The most effective compound, called N-0385, substantially reduced the amount of virus that could get into cells derived from lung and colon tissues. Similar results were seen with newer variants of the virus, including Delta.

The team then tested delivering N-0385 through the nose in a mouse model of severe COVID-19. Antiviral nasal sprays should have several potential advantages for treatment. SARS-CoV-2 enters the body mainly through the nose. Nasal sprays could easily be used by people at home. And delivering drugs directly into the nose and lungs reduces exposure to the rest of the body, potentially limiting side effects.

The researchers first gave N-0385 once a day, starting one day before viral exposure through six days afterwards. None of the ten mice that received a control dose of saline survived, but seven of the ten that received N-0385 did. Most of the mice that survived had little or no lung damage.

When the team repeated the experiment with a shorter course of treatment, from one day before exposure through two days afterwards, all 10 of the mice given N-0385 survived. In contrast, only one of the 10 that received the saline lived. Samples taken from three days after infection found that mice treated with N-0385 had 97% less virus in the lungs. When the experiment was done with only a single dose of N-0385 given the day of infection, treated mice had a high survival rate as well.

The treatment also showed protection against the Delta variant. These experiments were done before Omicron. However, because N-0385 works on host cells, it’s likely to be able to block different variants from using the target host proteins.

“The N-0385 therapy is simpler and less expensive to mass produce than other types of COVID-19 treatments, such as monoclonal antibodies,” Aguilar-Carreño notes.

The researchers are currently working with a biotechnology company to produce a version of the drug for testing in people.

This research summary was originally published by the National Institutes of Health on April 12, 2022.