“These are some of the hardest-to-reach populations and those often last in line for medical care.”

Medicaid enrollees are getting vaccinated against COVID-19 at far lower rates than the general population as states search for the best strategies to improve access to the shots and persuade those who remain hesitant.

Efforts by state Medicaid agencies and the private health plans that most states pay to cover their low-income residents has been scattershot and hampered by a lack of access to state data about which members are immunized. The problems reflect the decentralized nature of the health program, funded largely by the federal government but managed by the states.

It also points to the difficulty in getting the message to Medicaid populations about the importance of the COVID vaccines and challenges they face getting care.

“These are some of the hardest-to-reach populations and those often last in line for medical care,” said Craig Kennedy, CEO of Medicaid Health Plans of America, a trade group. Medicaid enrollees often face hurdles accessing vaccines, including worries about taking time off work or finding transportation, he said. 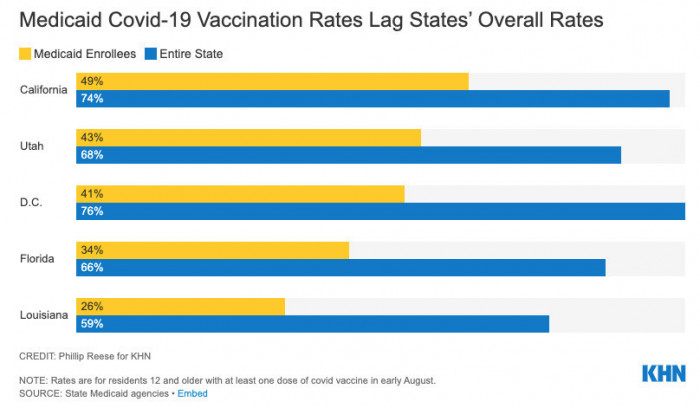 In California, 49% of enrollees age 12 and older in Medi-Cal (the name of Medicaid in California) are at least partly vaccinated, compared with 74% for Californians overall.

Unlike some other large states, such as Texas and Pennsylvania, California provides its Medicaid plans with information from vaccine registries, which can help them target unvaccinated enrollees. But still, the rate of immunizations lags far behind that of the general population.

According to detailed reports showing vaccination rates by county and by health plan, rates around the state vary dramatically. In Silicon Valley’s Santa Clara County, 63% of Medi-Cal members have been vaccinated, versus 38% in neighboring Stanislaus County. California health plans are working with community groups to knock on doors in neighborhoods with low vaccination rates and providing shots on the spot.

This fall, California — which has the nation’s largest Medicaid program, with nearly 14 million people — will offer its Medi-Cal health plans $250 million in incentives to vaccinate members. The state is also putting up $100 million for gift cards limited to $50 for each enrollee.

In other states — such as Kentucky and Ohio — health plans are giving $100 gift cards to members when they get vaccinated.

While more than 202 million Americans are at least partly vaccinated against COVID, nearly 30% of people 12 and older remain unvaccinated. Surveys show poor people are less likely to get a shot.

More than two-thirds of Medicaid beneficiaries across the country are covered by a private health plan. States pay a monthly fee to the plan for each member to handle medical needs and preventive care.

Nationally, about 70% of Medicaid enrollees are at least 12 years old and eligible for the vaccines, according to a KFF analysis.

“We know how we are doing, and it’s not great,” said Dr. Pamela Riley, medical director of the D.C. Department of Health Care Finance, which oversees Medicaid.

Hemi Tewarson, executive director of the National Academy for State Health Policy, said she “had hoped there would not be this much of a disparity, but clearly there is.”

Medicaid agencies in several states, including Pennsylvania, Missouri, New Jersey and Texas, said they lack complete data on vaccination rates and don’t have access to state registries showing who has been immunized. Health experts say that, without that data, the Medicaid vaccine campaigns are virtually flying blind.

“Having data is step one in knowing who to reach out to and who to call and who to have doctors and pediatricians help out with,” said Julia Raifman, assistant professor of health law, policy and management at Boston University.

For years, Medicaid programs have worked with providers to improve vaccination rates among children and adults. But now, Medicaid officials need more direction from the federal government to set up “a more clear and focused and effective approach” to control covid, Raifman said.

Chiquita Brooks-LaSure, the administrator of the Centers for Medicare & Medicaid Services, said the federal government is giving extra funding to state Medicaid programs to encourage COVID vaccinations. “We’re also encouraging states to remind people enrolled in their state Medicaid plans that vaccines are free, safe, and effective,” she said in a statement to KHN. Kennedy, of Medicaid Health Plans of America, said the job of getting shots to Medicaid enrollees is harder when states don’t share immunization data.

“We need access to the state immunization registries so we can make informed decisions to get those unvaccinated people vaccinated and identify those doing a great job, but it all starts with data sharing,” he said.

Medicaid agencies’ claims data doesn’t account for the many enrollees who get vaccinated at federal immunization sites and other places that don’t require insurance information.

California Medicaid officials said they can track enrollee vaccination by linking to the state Department of Public Health’s immunization registry, which captures residents’ inoculations regardless of where they occur in the state.

Data as of August 8 shows rural Lassen County in northeastern California with the lowest vaccination rate among Medi-Cal enrollees, at 21%, and San Francisco with the highest, at 67%.

Medicaid enrollees’ vaccination rates fall short even compared with those of other people in the same county. In San Diego County, for example, 91% of residents are at least partially vaccinated, compared with 51% of Medicaid recipients.

Jana Eubank, executive director of the Texas Association of Community Health Centers, said her clinics would be grateful to know which Medicaid recipients are vaccinated to better target immunization campaigns. Having the data would also help providers make sure people get an additional dose, often called a booster, being recommended this fall.

“We have a pretty good sense, but it would be great to have more detail, as that would allow us to be more focused with our finite resources,” Eubank said.

Pennsylvania’s Department of Human Services, which oversees Medicaid, said it requested vaccine registry data from the state health department in the spring but hasn’t received it. A health department spokesperson said her agency was working through legal issues to safeguard the registry’s personal health data.

“Getting accurate, comprehensive vaccination data for our Medicaid recipients is a priority, but we cannot do so based off claims and ad hoc data alone,” said Ali Fogarty, a Pennsylvania Medicaid spokesperson.

Dr. David Kelley, chief medical officer of the state’s Medicaid program, said the lack of immunization data hasn’t slowed the agency’s vaccination work: “We are continuing full steam ahead to get folks immunized.”

AmeriHealth Caritas, which operates Medicaid health plans in Pennsylvania, Florida and six other states and the District of Columbia, has about 25% of its Medicaid enrollees vaccinated, said Dr. Andrea Gelzer, senior vice president of medical affairs.

AmeriHealth is working with its doctors and community organizations to support vaccine clinics. It has offered free transportation and made vaccines available to homebound enrollees.

In Louisiana, the Medicaid program has offered bonuses to five health plans to spur vaccines. But so far only one, Aetna, has qualified.

Louisiana Medicaid is paying Aetna $286,000 for improving its vaccination rates by 20 percentage points from May to August, state and health plan officials said. Aetna had at least partly vaccinated 36% of its enrollees as of Aug. 16.

John Baackes, CEO of L.A. Care Health Plan, said he remains skeptical about paying people to get their shots and said it could upset enrollees who already have been vaccinated and won’t qualify for cash or a gift card. “We don’t think gift cards are going to move the needle very much,” he said.

As part of its strategy to increase vaccinations, the health plan has called members at high risk of COVID complications to get them into walk-up or drive-thru immunization sites and helped homebound members get shots where they live. About half the plan’s eligible enrollees have received at least one dose.

As of mid-August, about 56% of its eligible enrollees were at least partly vaccinated. “We are not where we should be, and the nation is not where it should be,” Sanchez said.

This article was published by Kaiser Health News on August 27, 2021. It is republished with permission.