Mutations can affect how viruses behave and how well drugs and vaccines work.

All viruses make errors, or mutations, as they copy their genetic material. These are random events that can make a virus either more or less harmful. Changes that help a virus spread more easily—but do not kill its host too quickly—confer a survival advantage. Mutations occur at a single point in the viral genome, but some viruses can exchange larger chunks of RNA or DNA, a process known as recombination.

The genetic blueprint of SARS-CoV-2, the coronavirus that causes COVID-19, is made up of RNA; influenza viruses and the hepatitis C virus (HCV) are also RNA viruses. The hepatitis B virus (HBV) and human papillomavirus (HPV) are examples of DNA viruses; DNA viruses mutate less rapidly than RNA viruses. HIV is a special case, a retrovirus that has an RNA blueprint that it must “reverse transcribe” into DNA in order to replicate. 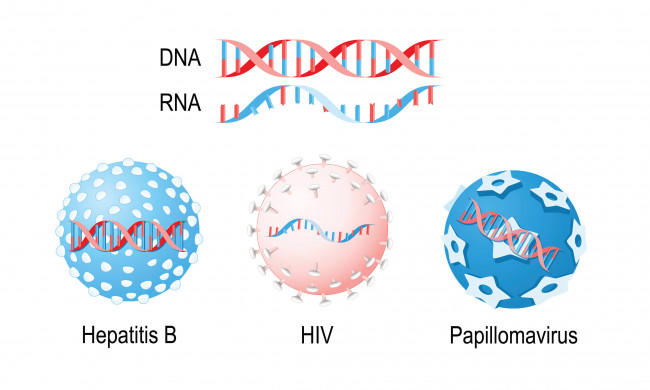 Certain mutations in the SARS-CoV-2 spike protein, which the virus uses to enter cells, can render it more harmful. A mutation called N501Y enables the virus to bind more easily to human cells and makes it easier to transmit. Another, known as E484K, confers resistance to some antibodies.

A variant becomes a strain once it has mutated enough to behave in a substantially different way. According to the World Health Organization, a mutation that emerged early in the COVID-19 pandemic, dubbed D614G, resulted in a more transmissible strain of SARS-CoV-2 that is now predominant worldwide. Experts disagree about whether the more recent variants are different enough to be considered new strains.

Viruses that share the same set of genes are known as a genotype. Hepatitis C has six major genotypes, numbered 1 through 6; HCV genotype 1 has two common subtypes, 1a and 1b. Hepatitis B has 10 major genotypes, designated by letters (A through J). Among the more than 100 genotypes of HPV, types 16 and 18 are most likely to cause cancer.

HIV is divided into two major genotypes, HIV-1 and HIV-2; HIV-1 is further divided into groups (M, N, O and P). The vast majority of cases worldwide are due to HIV-1 group M, which is further classified into subtypes (also known as clades) that occur in different parts of the world. For example, subtype B is most common in the United States and Europe, while subtype C is most common in southern Africa.

What does this mean for treatment and vaccines? Within a given genotype, strain or variant, genetic mutations continually occur. The rapid mutation of HIV and HCV has so far stymied the development of vaccines. Mutations can also lead to drug resistance, but these viruses generally can’t mutate enough to overcome a combination of medications that work in different ways.

SARS-CoV-2, HBV and HPV are more stable and can be prevented with vaccines. The immune system produces multiple antibodies against different parts of the SARS-CoV-2 spike protein, so most vaccines continue to work against most variants. Some vaccines are less effective against the beta delta variants—and more resistant variants could emerge in the future—but T-cell immunity may still provide enough protection to prevent severe COVID-19.