Update: On November 23, the University of Oxford and AstraZeneca announced that their adenovirus vector vaccine demonstrated up to 90% effectiveness.

***
Update: On November 18, Pfizer and BioNTech announced that the final efficacy analysis of its Phase III trial has shown that their vaccine has an efficacy rate of 95%. A total of 170 cases of COVID-19 were observed, with 162 in the placebo group and just eight in the vaccine group. Of the 10 observed cases of severe COVID-19, nine were in the placebo group, and one was in the vaccine group. The vaccine was effective for people of all demographic groups, including those over age 65.

The vaccine appears to be well tolerated, with no serious safety concerns reported to date. About 4% of participants reported severe fatigue and 2% reported severe headache after the second dose. Older adults reported fewer adverse events.

Based on these findings, the companies said they plan to submit a request to the Food and Drug Administration for emergency use authorization “within days” and will also submit the data to other regulatory agencies around the world.


***
Update: On November 16, the National Institutes of Health and Moderna announced that a second coronavirus vaccine showed 95% efficacy based on interim Phase III results.

An experimental coronavirus vaccine from Pfizer and the German biotechnology company BioNTech reduced the likelihood of symptomatic COVID-19 by more than 90% in an interim analysis, the companies announced on November 9.

Although the results are still preliminary, and the data have not yet been peer-reviewed or published, this is a promising development as new cases of COVID-19 continue to rise worldwide. But even if one or more vaccine candidates are approved this year, widespread deployment is not expected until well into 2021.

UPDATE: We are proud to announce, along with @BioNTech_Group, that our mRNA-based #vaccine candidate has, at an interim analysis, demonstrated initial evidence of efficacy against #COVID19 in participants without prior evidence of SARS-CoV-2 infection.

The Pfizer/BioNTech vaccine, known as BNT162b2, employs a novel messengerRNA (mRNA) approach. The vaccine uses lipid nanoparticles to deliver bits of genetic material encoding the SARS-CoV-2 spike protein, which the new coronavirus uses to enter human cells. When injected into a muscle, the vaccine causes cells to express the protein, triggering an immune response. No mRNA vaccines have yet been approved for any disease.

People who received two doses of the vaccine had more than 90% fewer cases of symptomatic COVID-19, the companies reported in a press release. These findings come from an international Phase III trial that has enrolled more than 43,000 people since late July. Nearly a third of the participants in the United States were people of color, including Black and Latino populations that have higher rates of coronavirus infection, severe disease and death.

An interim analysis of nearly 39,000 participants who received two injections of either the vaccine or a placebo found that a total of 94 were infected with the coronavirus and developed symptoms. The reported efficacy suggests that fewer than nine of these were people who were randomly assigned to receive the vaccine. A final efficacy analysis will be done after 164 symptomatic cases occur.

It is not yet clear whether the vaccine prevents people from catching SARS-CoV-2—as opposed to just lowering the likelihood of developing symptomatic disease—or whether it makes them less likely to transmit the virus, which will be key to the development of herd immunity. It is also not yet known whether the vaccine will prevent hospitalization or reduce mortality.

“Today is a great day for science and humanity,” said Pfizer chairman and CEO Albert Bourla, DVM, PhD. “ We are reaching this critical milestone in our vaccine development program at a time when the world needs it most with infection rates setting new records, hospitals nearing overcapacity and economies struggling to reopen. With today’s news, we are a significant step closer to providing people around the world with a much-needed breakthrough to help bring an end to this global health crisis.”

Pfizer did not offer much new information about the vaccine’s safety. However, it was generally safe and well tolerated in a Phase II trial. The most common side effects were fatigue, headache, fever, chills and injection site reactions, mostly mild to moderate, which occurred more often after the second dose.

A 90% efficacy level is higher than many experts expected for the first COVID-19 vaccine, putting it in the range of measles vaccines. The Food and Drug Administration (FDA) has set a threshold of least 50% efficacy for a COVID-19 vaccine to be considered for approval. Seasonal flu vaccine effectiveness usually ranges from around 20% to around 60%.

A high level of effectiveness could go a long way toward encouraging people to get vaccinated. With 90% effectiveness, recipients can be fairly confident that they’re likely to be protected. Although a 50% effective vaccine could make a big difference in terms of reducing illness and death on a population level, an individual would have only a 50-50 chance of being protected, making it unsafe to forgo precautions such as social distancing.

COVID-19 vaccines have been developed with unprecedented speed. Early in the pandemic, Fauci predicted that a vaccine could be available in 12 to 18 months, and that projection appears to be on track. In fact, China and Russia are already deploying COVID-19 vaccines despite less extensive safety and efficacy data.

Several vaccines have received funding from the federal government’s Operation Warp Speed, which aims to speed vaccine development and deployment. The Pfizer vaccine was not part of that development effort, though the government has agreed to purchase some 100 million doses if it’s approved.

Other coronavirus vaccines are not far behind Pfizer’s candidate, with Phase III clinical trial results expected by the end of the year. Moderna’s vaccine (mRNA-1273) also uses an mRNA approach similar to Pfizer’s. A vaccine from the University of Oxford and AstraZeneca (AZD1222 or ChAdOx1 nCoV-19) uses a weakened chimpanzee adenovirus to deliver genes encoding the SARS-CoV-2 spike protein. A vaccine being developed by the Chinese biotech company CanSino Biologics uses a weakened form of the common cold virus adenovirus 5 to deliver viral genes.

All these vaccines showed promising activity in early studies, stimulating both antibody production and T-cell immune responses. It remains to be seen with longer follow-up how long antibodies might last in the body and remain active against the virus; T-cell responses could persist even if antibody levels wane over time.

The FDA is requiring that all vaccines tested in the United States must have at least two months of safety data to be considered for approval. The Pfizer vaccine should reach this mark by the end of November. The large size of the Phase III trials—which together have enrolled more than 100,000 participants—are likely to reveal any common side effects. The AstraZeneca/Oxford vaccine trial was halted in September after a study participant experienced a severe adverse event, but it was deemed to be unrelated to the vaccine, and the trial has resumed.

Once a vaccine receives FDA emergency use authorization, it will take several more months before it is widely available. Producing, packaging, transporting and distributing vaccines worldwide is a major logistical undertaking. The Pfizer vaccine, in particular, has the additional challenge of needing super-cold refrigeration at minus 94° Fahrenheit, well below the temperature of standard freezers typically available in frontline medical facilities. It will keep for only about two days at room temperature.

Public health experts have developed a plan for prioritizing vaccine distribution. People at highest risk for coronavirus exposure, such as health care workers, are first in line for the vaccine. Next will be vulnerable people who are more likely to develop severe COVID-19, including older people and those with underlying health conditions. The supply may be adequate to vaccinate the general public by next summer, especially if multiple vaccines receive authorization. Pfizer expects to manufacture up to 50 million doses by the end of this year.

“I congratulate the brilliant women and men who helped produce this breakthrough and to give us such cause for hope,” President-elect Joe Biden said in response to the Pfizer/BioNTech news. “At the same time, it is also important to understand that the end of the battle against COVID-19 is still months away. This news follows a previously announced timeline by industry officials that forecast vaccine approval by late November. Even if that is achieved and some Americans are vaccinated later this year, it will be many more months before there is widespread vaccination in this country.” 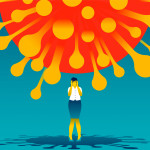