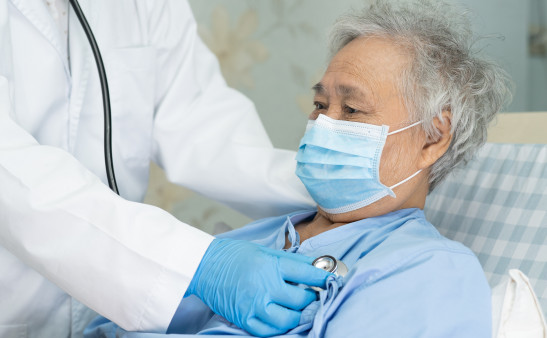 Data from a large COVID-19 and cancer registry also showed that hydroxychloroquine plus azithromycin is associated with higher mortality.

People whose cancer is progressing are at higher risk of death from COVID-19 than those in remission, according to findings from the COVID-19 and Cancer Consortium registry presented as part of the American Society of Clinical Oncology (ASCO) annual meeting virtual scientific program. Patients who used hydroxychloroquine plus azithromycin to treat COVID-19 were nearly three times more likely to die.

A related study, drawing on data from the international TERAVOLT registry, which is collecting data about COVID-19 among people with lung cancer and other thoracic malignancies, found that having received chemotherapy within the past three months was a risk factor for mortality.

“The cancer care community urgently needs data on the effects of COVID-19, specifically in patients with cancer,” said ASCO president Howard Burris III, MD. “How we improve the care we provide these patients and reduce the number of deaths and severe consequences associated with this disease are among the top questions.”

People living with cancer may be more likely to contract the novel coronavirus (officially known as SARS-CoV-2), although the data on this are unclear. Some chemotherapy and targeted therapy drugs, as well as bone marrow transplants for blood cancers, cause depletion of immune system white blood cells that fight infection.

What’s more, cancer patients appear more likely to have negative outcomes of COVID-19, the disease caused by the new virus. Studies have consistently shown that older individuals, people with compromised immune systems and those with underlying health conditions are more susceptible to severe COVID-19 illness and death.

National Cancer Institute director Ned Sharpless, MD, warned meeting participants that the COVID-19 pandemic likely will have a detrimental impact on cancer mortality, which has been steadily declining since 1990. In addition to direct interactions between COVID-19 and cancer, the health crisis has led to delays in diagnosis and treatment and the interruption of clinical trials of new therapies.

CCC-19 Registry
Jeremy Warner, MD, of Vanderbilt University Medical Center in Nashville, presented the first data from the COVID-19 and Cancer Consortium (CCC19), on behalf of a team of more than 70 investigators. The findings were also published in The Lancet.

The researchers analyzed anonymous data from 928 adults with cancer and confirmed SARS-CoV-2 infection in the United States, Canada and Spain collected between March 17 and April 16, 2020.

The median age was 66, and nearly a third were 75 or older. Half were men, and half were women. Half were white, 16% were Black, 16% were Latino and 14% were classified as other or unknown race/ethnicity. Warren noted that Black and Latino patients were overrepresented relative to their geographical region.


The most common cancer types were breast cancer (21%), prostate cancer (16%), gastrointestinal cancers (12%), lymphoma (11%) and lung or other thoracic cancers (10%). Across all types, 43% had active, or measurable, cancer, 39% were currently receiving cancer treatment and 45% were in remission.

Half of the patients in the analysis were hospitalized for COVID-19, 14% were admitted to an intensive care unit (ICU) and 12% required a mechanical ventilator, the researchers reported.

At the time of the analysis on May 7, a total of 121 patients had died, for an overall death rate of 13%. Those whose cancer was progressing were about five times more likely to die than those who were in remission. Mortality rates were 25% for those with progressive disease, 14% for those whose cancer was stable or responding to treatment and 9% for those who were in remission or had no remaining evidence of disease. As expected, mortality rose steeply with age, from 6% among those under 65 to 25% among those over 75.

Other independent risk factors for mortality included male sex (17%, compared with 9% for females), a history of smoking, having two or more coexisting health conditions and an ECOG performance status of 2 or worse (meaning a patient is capable of self-care but unable to work and is up and about more than half the time). Those who were hospitalized had a mortality rate of 23%, rising to 38% for those admitted to intensive care.

About one in five people in the registry used hydroxychloroquine plus azithromycin, a malaria drug and antibiotic combination touted by President Trump; only one tenth of them did so as part of a clinical trial. Patients treated with both medications were about three times more likely to die, although there was no significant increase among those who took either drug alone. Due to confounding factors, Warner emphasized, "prospective studies are needed to truly demonstrate the risk or benefit of these drugs.”

However, other factors linked to worse COVID-19 outcomes in previous studies—including race, obesity, cancer type, type of cancer treatment and recent surgery—did not appear to raise the risk of death in this analysis. Based on these early findings, the researchers suggested that surgery and chemotherapy could continue during the pandemic with “extreme caution.”

In contrast, a study from China presented at the recent American Association for Cancer Research (AACR) virtual annual meeting found that people with blood cancers or lung cancer and those currently receiving cancer treatment did have a higher risk of severe COVID-19 illness or death.

“People with cancer face a great deal of uncertainty in the era of COVID-19, including whether the balance of risks and benefits in the treatment of cancer has shifted in some fundamental way,” Warner said in a Vanderbilt press release. "Certain subgroups, such as patients with active (measurable) cancer and those with an impaired performance status, fared much, much worse.”

“A number of factors—preexisting lung damage, smoking status, advanced age and comorbidities—make patients with thoracic cancers especially vulnerable to COVID-19,” Burris said in an ASCO press release. “There are a lot of questions right now and not a lot of answers.”

At the AACR virtual annual meeting in April, researchers presented the first data from TERAVOLT, which then included 200 patients in more than 20 countries, largely in Europe. A majority were hospitalized, but most were not offered intensive care for COVID-19. More than a third died, mostly due to COVID-19 rather than cancer. In that analysis, specific types of cancer treatment were not significantly associated with an increased risk of death.

The updated analysis included 428 people, about three quarters of whom had NSCLC. A majority were men, and most had a history of smoking. About two thirds had Stage IV, or metastatic cancer that had spread elsewhere in the body. A majority were on chemotherapy, and a quarter received radiation therapy.

Overall, just over a third of the patients died. The cause of death was COVID-19 for 79%, cancer for 11% and both for 9%. Here, too, older age, underlying health conditions and poorer ECOG performance status were associated with increased mortality. Most of those who died were hospitalized, 8% were admitted to an ICU and 5% were put on ventilators. (In some areas, people with advanced cancer might not have received the most advanced COVID-19 care when medical resources were overwhelmed.)

In this new analysis, type of cancer treatment did appear to play a role. Only patients who received chemotherapy within three months of their COVID-19 diagnosis—either alone or in combination with other therapies—had a significantly higher risk of death. The mortality rate among those on chemotherapy was 64%. Those who received kinase inhibitor targeted therapy or immunotherapy were not at increased risk.

The researchers also looked at other treatments not specifically for cancer. Those who received anticoagulants (drugs to prevent blood clotting) and anti-inflammatory corticosteroids before their COVID-19 diagnosis had an increased risk of death (1.5 times higher for those on corticosteroids). People with COVID-19 often develop blood clots, and some clinicians favor preventive anticoagulant therapy. Experts have raised concerns about whether steroids are helpful or harmful for people with COVID-19, but evidence to date has been mixed.

The type of treatment patients received for COVID-19 did not appear to affect their risk of death. People who died and those who survived were about equally likely to receive anticoagulants, antibiotics, antivirals, antifungals, corticosteroids, drugs targeting IL-6 (such as Actemra, or tocilizumab) and hydroxychloroquine.

Horn remarked on the speed with which studies of COVID-19 in people with cancer and registries like TERAVOLT and CCC19 have been implemented in the face of the global pandemic.

“We have seen clinical trials being funded, approved and begin enrolling patients within weeks, when it can often take months or years to get approval for a trial,” she said.